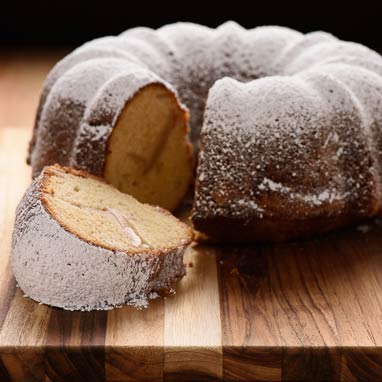 "The first cake that I ever baked was a Bundt cake, and I have since become a Bundt Cake expert. I started baking in the fall of 2012 and I have probably made over a hundred Bundt cakes in that time. I even won the office's bake off during the show's first season. After my victory they stopped the contest, because everybody conceded stating that I was always going to be the top baker. Well they were right; I now have eight different Bundt cake pans in my kitchen cabinets. They have unique designs from the classic Bundt cake to spiral and heart shapes.

"In this recipe I use Duncan Hines Original Apple Pie filling instead of baking the apples in the oven—it is easier to cook with and the apples are always soft. I love using powdered sugar when I bake. I call it magic dust, because it will make any dessert taste scrumptious."
—Rushion McDonald