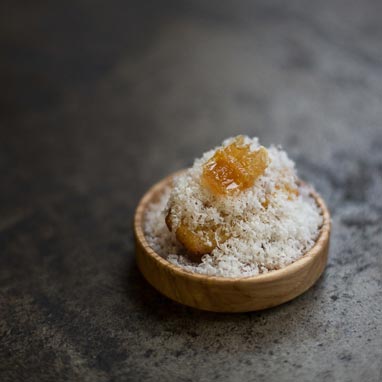 "Lardo is something that you may need to ask a good butcher about. Here in Portland we use lardo from Chop and Tails & Trotters, which are two of our favorite butcher counters in town. Lardo is fat back that has been cured similar to pancetta. If you are unable to source it easily, a very fatty, thinly sliced piece of pancetta can work as well." -Holdfast Chefs, Joel Stocks and Will Preisch

Will Preisch & Joel Stocks have been working together off and on since 2010 when they first met at Park Kitchen. They quickly realized they shared similar ideas about food and bourbon, and went on to open the Bent Brick. Both have been around food their entire lives, and worked in professional kitchens from a young age. Growing up in Cleveland, Will worked at his dad's 24 hour diners from the time he was in elementary school, all the way through high school. Since moving to Portland in 2005, he's worked at Le Pigeon as well as his time at Park Kitchen and The Bent Brick. Before the start of Holdfast, he was travelling on a culinary tour of Europe and Iceland. As a Portland native, Joel decided he wanted to cook in the sixth grade, setting his sights on the Culinary Institute of America in Hyde Park. After graduating and returning to Portland, he has worked at Noble Rot and 50 Plates besides the time he worked alongside Will. Most recently he is returning to Portland from Chicago, where he was the sous chef at the two Michelin starred Graham Elliot Restaurant.