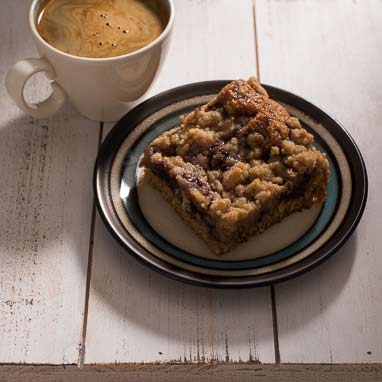 Restaurant pastry chefs have to be ready for anything at a moments notice and food preferences are no exception. This delicious Vegan Crumb Cake is Chef Kristen Napoleoni's (Clyde Common) go-to recipe when she needs a vegan dessert on the fly. Loaded with jam, the cake is scrumptiously moist and sweet with a crunchy crumb topping.

"I graduated from the Culinary Institute of America in 2010 and soon started working at Perennial Virant in Chicago. After my time at PV, I worked at various places in Chicago for the following 2 years, most notably as a pastry assistant at Lula Cafe. I moved to Portland in June of 2015. Here in Portland, I reunited with Carlo Lamagna, whom I worked with at PV, and became the pastry chef at Clyde Common. Since then I've been in charge of both the bread program and desserts at Clyde."—Kristen