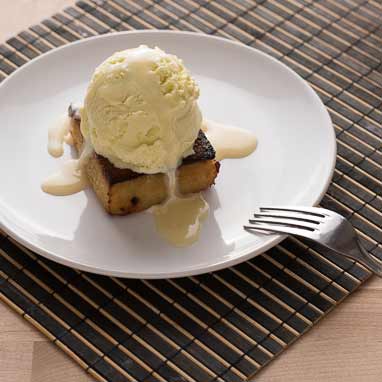 Cassava root, also known as yuca, yucca, tapioca, and several other names, is a fibrous root native to South America. It can be purchased at Asian food stores in many forms. Chef Anh Luu at Tapalaya recommends getting it in packages that have been grated and then frozen. It thaws quickly and will save you a lot of hand grating. At Tapalaya, this cake is served topped with pandan coconut ice cream.

Born in New Orleans where she lived with her Vietnamese family, Chef Anh Luu experienced a melding of culinary cultures early in her childhood. She grew up with the flavors of Southeast Asia from her parents' cooking alongside the classic French, Spanish, Caribbean, and African cuisine of New Orleans. This delicious culinary melange inspired her years later to create the unique Asian-Cajun tapas cuisine that she and owner Chantal Angot introduced at Tapalaya in Portland, Oregon in the fall of 2014. In spring of 2017, Anh bought the restaurant and continues to introduce Vietnamese ideas and flavors into her cuisine.